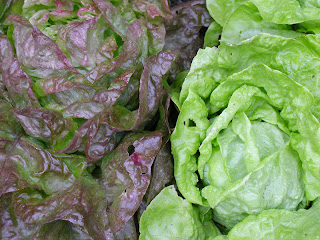 Despite all the unseasonally wet weather we've had so far this year my lettuces have been left alone by the slugs.... a total miracle! The seedlings which have started to come up seem to have been spared as well. My French Marigolds weren't so lucky! I did happen to notice the signs that a Mistle Thrush had been close by with a number of smashed snail shells left behind as evidence - so I was glad I'd not used slug pellets.

If any of you reading this has had a problem with blight (a fungal disease which is brought on by wet and damp humid weather) this year which have affected your potato crop, the tip is to remove all of the plant above soil level which will help prevent the potatoes themselves being affected. Ensure you burn all the affected foilage so contamination doesn't affect next year's crops or any tomatoes for that matter. Also you're advised not to plant tomato and potato crops in close proximity to help prevent the spread of this fungal disease. You also might like to consider adopting a system of crop rotation which will help avoid crops being infected with the same disease year after year as the spores etc remain in the soil. Bon courage!
Posted by Miranda Bell at 23:13