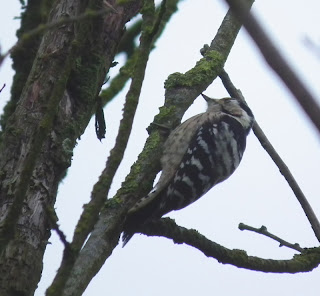 Thank you so much for visiting my blog - maybe for the first time or perhaps you're a regular visitor - whichever the case I really hope you have  a very Happy New Year as we start 2011 - hoping that this year will bring you much happiness, health and prosperity and not to forget - fun in the garden enjoying all the simple pleasures in life that often get bypassed and forgotten! 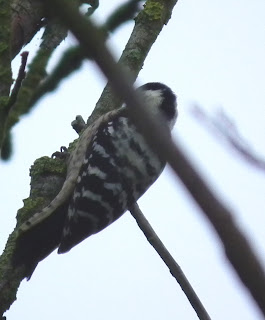 It's been wonderful to see the array of winter bird visitors in our garden here in northern Brittany - and I thought I'd share one or two of the photos I've taken over the Christmas period to share with you here.  The first two photos were a fantastic surprise - I was out walking the dog today at 10am this morning and had luckily decided to take my camera - still feeling rather bleary-eyed after a fun and rather late night with friends :-) - only a few minutes from our house I heard the frantic tapping up in the trees that I've only heard 3 times in 7 years - that of the Lesser Spotted Woodpecker and then tried in vain to get a photo.  It was easier said than done as this species of Woodpecker is very much smaller than the Great Spotted moving around so quickly and drumming frantically into the dead wood of the trees -these were the best ones (not the best but at least it will give you an idea). Only the male has red on his head  - this was a female - no bigger than the size of Blackbird with a small round head and short, pointed beak - the feathers on the back are distinctly barred in black and white - and being particularly shy they're not often seen, so I considered myself very fortunate. 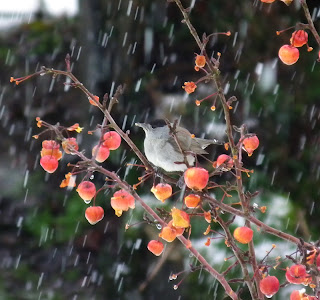 Just before Christmas having only been saying that I'd not seen the Blackcaps this year I happened to look out of the window of the bedroom and spotted this little chap chomping on the last few Crab Apples - this is Malus "Everest" - a smallish sized tree but one that produces lovely blossom in spring and a good harvest of fruit - I must admit I usually leave these on the for the birds. 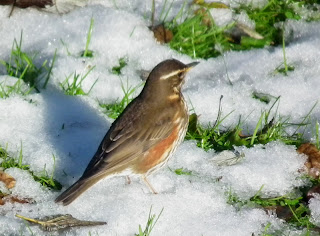 Another shot I was pleased to get was that of a Redwing - this is the first time I've seen them in our actual garden - they're normally well disguised amongst the piles of leaves in the woodland foraging for the dregs of the apples but this one was a bit braver! 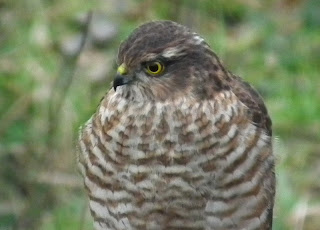 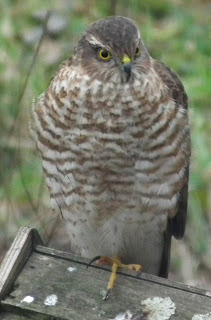 Two days ago I was up in our office looking out in the garden when I noticed a distinct lack of activity in the garden - not a small bird in sight - I very quickly realised why - talk about unsubtle - this beautiful Sparrow Hawk was perched on the roof of our bird table... another moment of having the camera there just at the right time... what a magnificent bird. 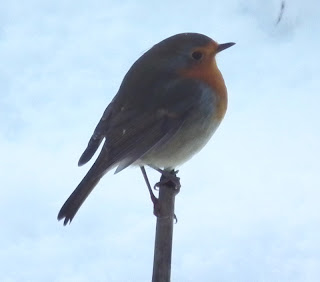 This winter we seem to have quite a number of Robins in our garden - this was a shot taken before Christmas whilst we still had the snow. 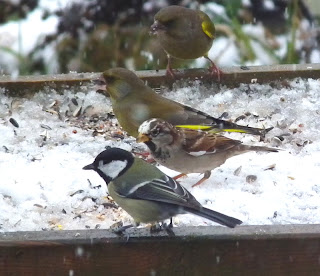 This photo was also taken during the snow and features a sparrow that looks as if it's dunked his head into a bit of bleach... I've never seen any others quite like it!
As the year progresses I hope to be able to bring you more photos from our garden of both the plants and wildlife and keep you posted on our latest projects as well as postings from further afield as well.
Take care, enjoy the festivities and see you soon...
Posted by Miranda Bell at 16:21 31 comments: